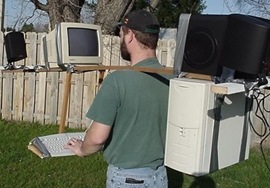 The days of sitting in your office and working on a desktop computer are long gone.  The laptop has become the computing tool of choice for most people, but now smartphones and tablets are augmenting or replacing it as business is done from anywhere, at anytime.

Mobile devices and cloud computing are fueling our ability to get work done wherever we are.  There is freedom in sharing documents across your many devices by tapping into cloud services, like Dropbox, Google Docs, SkyDrive, iCloud and Box.  It makes it simple to collaborate with colleagues and business partners no matter where they are, what time they want to work or what device they use.  But there is also risk as more information floats freely around the Internet and on mobile devices.

When things like this happen, some people want to condemn the technology and say they are not safe.  Don’t use the cloud!  Stop using USB drives!  Let’s all go back to pencils and paper!

It’s a bit of a knee jerk reaction, but understandable when faith in trusted technology fails us.  In both cases, there were policy and process flaws to blame in addition to problems with the technology.

In the OHSU case, there was a process breakdown because the employee was allowed to take the USB drive out of the building.  If OSHU had encrypted the information on the portable device, it would have nullified the first problem.

In the case of Mat Honan, he admits that he was a bit lazy about security and that he had all his accounts tied together.  He used Gmail as his password recovery account for numerous cloud services and they were compromised when his iCloud account was hacked.  Access to one of his accounts gave hackers the keys to the kingdom.  This doesn’t excuse the lax approach Apple had to giving an impostor a temporary password, but shows again that process and technology both failed.

Since businesses will continue to use mobile devices and cloud services, make sure you follow a few simple rules to safeguard important information.

Using portable devices and cloud services makes everyone’s life easier.  It allows us the flexibility of doing business anywhere.  Data breaches and hacked accounts shake our faith a bit and hopefully make us think more about persistent information security.  We hate thinking about all of this and just wish it would take care of itself.  Until everything magically encrypts itself and limits our access, we need to lock a few of the doors to prevent the bad guys from getting in.