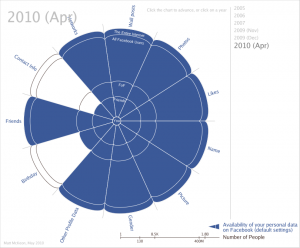 May 31, 2010 … a day that may live in social networking infamy. Or it may pass with a whimper.  Some dubbed this day Quit Facebook Day. There is a Quit Facebook Day website for those who want to protest and delete their accounts.   As of this writing there are 32,649 people who say they will quit. While that’s not an insignificant number, it’s a drop in the ocean compared to the estimated 500,000,000 people using Facebook.

Of course all this hullabaloo is because Facebook keeps changing their privacy settings to the point where no one without a PhD can decipher them.  It used to be that I could set my account to allow Friends to view my information.  If I wanted to open it wider, I could allow Friends of Friends too. Or I could allow Everyone to view my information.  I thought that Everyone meant Everyone who has an account in Facebook.  A large number of people, but small compared to the entire Internet.  Now, I am not sure if Everyone also means everyone who has access to a search engine.

The graphic above from Matt McKeon shows the evolution or maybe de-evolution of privacy in Facebook.  Recently I wrote about how to opt-out of Facebook’s instant personalization program.  For some people that was the last straw.  This function enables 3rd party services like Pandora to access information about you and your friends.  Unfortunately preventing your information from being made public is very difficult to do and convoluted.  Very public personalities, such as tech journalist and podcaster Leo Laporte, decided to quit Facebook publicly.  Leo’s TWiT network was the forum he chose to do it.  In fact he did it on his show, This Week in Google.  I don’t know if that was coincidence or not.

But will all this public uproar really accomplish anything?  Is Facebook in fact the new evil empire?  Last week, Facebook Founder Mark Zuckerberg announced new privacy settings for Facebook.  Zuckerberg acknowledged that Facebook has made it too difficult to secure private information and has come up with a solution to simplify things.  So, in fact it appears that the outcry has forced Facebook to make changes.  I think Zuckerberg sees that traditional banner ad sales are dropping and he’s looking for the next way to monetize Facebook.  He figured that giving advertisers more access to the enormous database of information in Facebook would allow him to do that.  The concern of most people is that he didn’t ask them first.  They signed on to Facebook assuming that their private information would remain private, unless they said otherwise.  If he asked them to opt-in first, many may have said yes.  But many may have said no.  Either way it would have kept the implied covenant between Facebook and its users.  i guess it’s easier to pull a mea culpa after the fact and say we didn’t realize that there would be a public outcry.

In the next few weeks Facebook will be rolling out an updated interface so that a user can easily decide how public to make their information.  They will keep the granular settings for those who want to tune and tweak things, but the defaults will be easy to understand.  I equate this to how computer operating systems let you decide on every little setting, if you like, but by default they pick optimal settings for most people.

So how many people will actually quit Facebook?  My guess is very few compared to the millions that will stay.  Most people I talk to are not worried about their information, including my kids.  They assume that if they put something on the Internet, it’s available to anyone.  They don’t have the same concern about privacy that I do.  I don’t know if they are naive or realists.  I don’t put anything that I consider private on Facebook or any site on the Internet.  I like sharing pictures and videos with people because I like to share parts of my life with friends, coworkers and potentially anyone.  I do the same with status updates and comments I share.  Obviously not everyone thinks that.  Some people put everything in their lives on social networking sites.  Maybe they don’t care or maybe they aren’t aware that it’s public.

The next few weeks should be interesting for Facebook and its users.  Will the new privacy settings placate users or will they jump ship in droves?  Will projects like Diaspora become the next Facebook?  My feeling is that Facebook will placate enough people to remain relevant for now.  If they continue to provide a valuable service, people will stay.  I have seen enough businesses in the last 20 years go up, crash and come back from the dead to know that markets are fickle, but value always wins out.  IBM reinvented themselves 20 years ago to become the top services company in the world.  Apple came back from the dead starting in 2000.  MySpace went from a must have to an also ran.  If Facebook gets its act together it will thrive.  If not, something will come along to replace it.  5 years ago who heard of Twitter?